The first 2×10 PreBS 20+ was just completed for a repeat client in Chicago. Big iron from Mercury Magnetics and a user adjustable bias trim pot and test points on the rear panel allow for use with 6V6,5881, or 6L6GC power tubes. Several popular speakers were tested and chosen to compliment each other. The final combination is one Weber 10A125 and one Jensen Falcon 10. A versatile handwired amp with Deluxe Reverb and Vibrolux Reverb qualities! 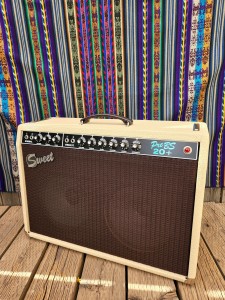 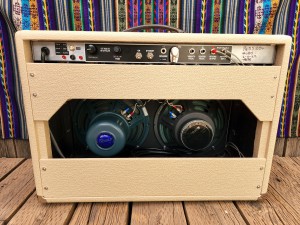 A newly completed T12 is available now, not yet spoken for. I built this in a color scheme that I’ve been wanting to see for some time now and with the blue stripe in the grill cloth more prominently displayed. Has all of the good stuff including Mercury Magnetics trannies, 3-way gain switch, Eminence GA-  SC59 alnico speaker, progressive standby/power switch, and new “Inside Voice” attenuator switch. It’s ready to rock in the studio, bedroom, or stage!    Vintage and Beyond! 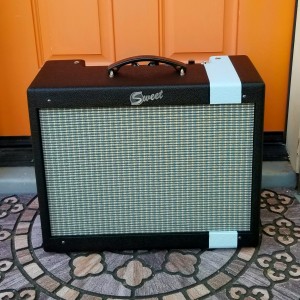 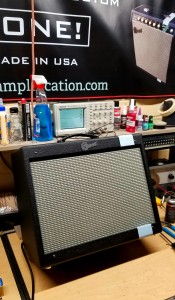 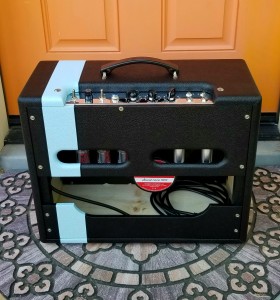 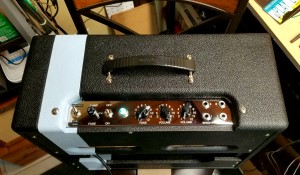 A newly completed PreBS-T12+, the classic 5E3 tweed Deluxe with some features for more versatility. This one has custom Mercury Magnetics trannies for use with 6V6 or 6L6 power tubes, bias switch to make whichever tubes you use happy, a 3-way gain switch, and a killer alnico Eminence GA-SC59 speaker. Classic tweed deluxe tones with more versatility than the traditional hair triggered 5E3 circuit. Vintage and beyond! 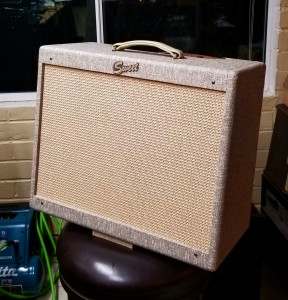 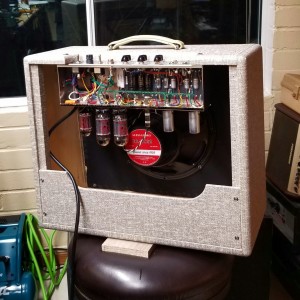 The 2nd new build from Tucson just shipped out! A PreBS T5+ in traditional lacquered tweed with oxblood grillcloth, BIG trannies from Mercury Magnetics for a 6L6 power tube, and 10″ Celestion G10 Gold speaker! Of course it has the 3-way gain switch and this is the first Sweet to have a “bedroom level” attenuator switch! Go from full power 8W to .8W with the flip of a switch. This amp is LOUD and the built in attenuator really makes it a more domestically friendly amp for the bedroom, studio, living room or wherever you got your rig set up. A solid 5F1 build with tonal options! 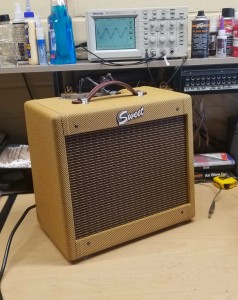 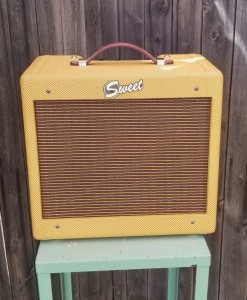 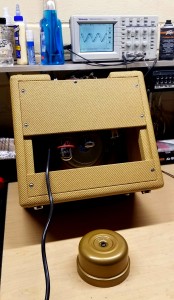 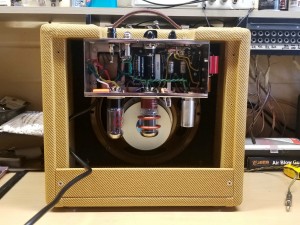 No room for the bell cover…

The first build in the new Tucson shop is a PreBS 15 to match the owners other two Sweet amps! Brown western tolex with Marshall cane grill cloth, Mercury Magnetics transformers, 10″ Jensen Falcon speaker, push-pull mid boost, and user adjustable bias test points and trim pot on the rear panel. This is one of only two PreBS 15 that I built with a 10 and it turned out killer! I may have to build another just like it for stock! 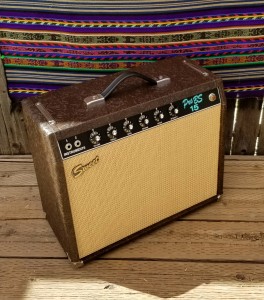 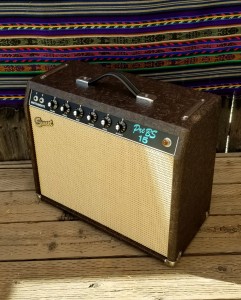 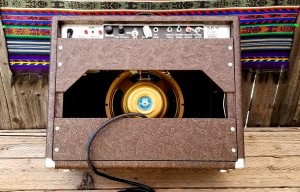 Pics were before the final speaker selection. See next build for the reappearance of the G10 Gold! 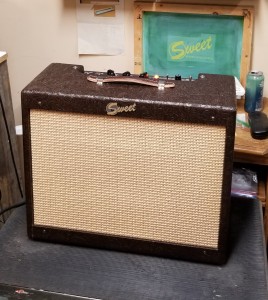 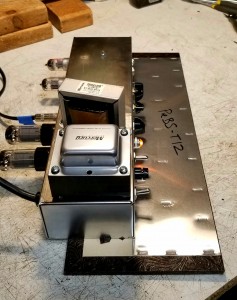 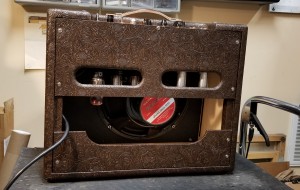 Posted in Uncategorized | Comments Off

In between gigs, I worked in repair shops and Music Stores, most notably, John Shaw’s “The Music Store” for 10 years, developed the Sweet Amplification line of hand wired all tube amps, and in 2011, I became the in house amp tech/Amp Works department of Chicago Fret Works which also became the new home for Sweet Amplification. I am grateful for the experience and support I received from owners Steve Baker and Dan Wolf. They trusted me to handle all amp related matters, built out a great space for the Amp Works part of the shop,  provided a very relaxed and comfortable work environment, and introduced me to many new friends and clients including local/national indy band Wilco, Jeffy Tweedy, and the team from “the loft” which lead to building a custom amp for Pat Sansone dubbed the “Sansonic” which has been on several tours with both Wilco and The Autumn Defense since 2013.

It is with much appreciation and some apprehension that I have decided to move on to greener/warmer pastures. Chicago is a top notch city but the long, cold, and dark winter doesn’t agree with my aging bones, arthritis, and mental health. After getting vaxed and taking a few brief scouting trips, I have decided to make a new start in sunny Tucson AZ. I know it’s not a music mecca like Nashville, Austin, or Nola, but it’s absolutely beautiful, peaceful, and has it’s own unique music, artistic, and cultural scene that I’m looking forward to exploring.

I’ll most likely be opening my own shop in early 2022 and will be excepting new orders and even shipped repairs.  Stay tuned and thanks for your interest and support! 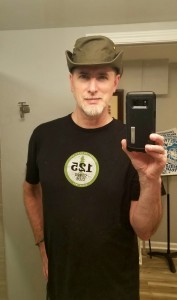 A newly completed custom ordered PreBS T5 with a traditional lacquered tweed covering and oxblood grillcloth! Other standard features include a WGS 8″ speaker, 3-position gain switch, rear panel shielding, and 1/4″ speaker jack for easy connection to an extension cab make this one of the best 5F1 builds available! 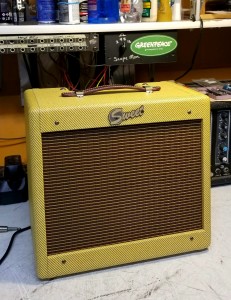 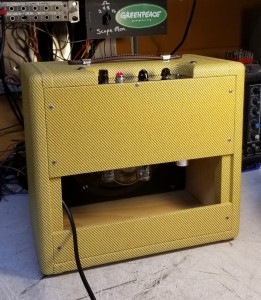 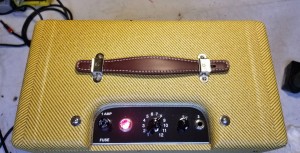 Posted in Uncategorized | Comments Off

“I ran all of my guitars through it – Telecaster, Riviera, ES-175.  They all KILL through your amp.  At any volume level.  Tone, dynamics, and nearly silent at idle.  Notes just sing and sustain.  Very little in the way of dialing in tone.  Set it and forget it. Clear without icepick.  Warm, textured, dynamic.  Yeah, it kills.  The speaker kills.  In the short time I’ve had it, I’ve already played things that I’ve not played before.  That says it all.” -RY 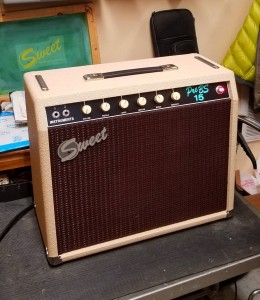 SOLD!
Posted in Uncategorized | Comments Off

A custom order PreBS 15+ with Carolina blue tolex and cane grillcloth. As always with the + models you can swap 6V6 for 6L6  power tubes for more power and headroom with the upgraded Mercury Magnetics trannies. I definitely prefer 6L6s, especially in a band situation and the GA-SC64 Eminence speaker is the icing on the cake! Simultaneously warm and clear with a distinctive vintage character at low to moderate volumes and glorious with rich harmonics and growl when pushed hard! The push-pull mid boost takes it into early Marshall territory with singing ringing feedback when cranked. Think early Angus Young and how he would let the note ring until it just started to feedback on a single note instead of noodling and shredding a million more notes.  From country to R&B, blues, surf, and classic rock, it’s in there. A Sweet tone machine! 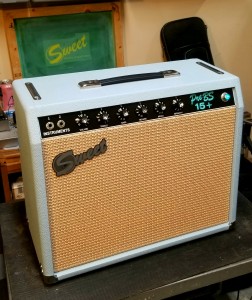 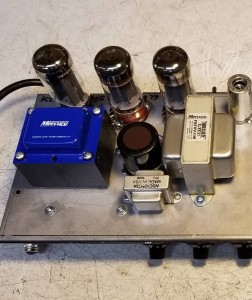 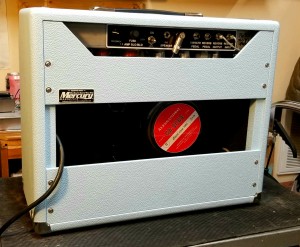